Ramiah killed someone while on a car chase with the police. His life was  of control . His is another example of transformation .
click to view Ramiah Whiteside's Blog

My name is Ramiah Whiteside and I am writing to you in hopes that you can answer some of my questions or give me some feedback on my concerns.

It is 2009 and i am no longer seven years old. It would be nice to tell you that even after so many obstacles that seven year old little boy managed to make it in life. Unfortunately, that seven year old boy gave up hope. As an happened to him. why did her give up? Looking around me each day, I see many seven year old kids trying to make their way through life just like I once did. The sad part is, I am in an adult institution. None of us grew up aspiring to be prisoners, yet, here we are. We made bad decisions and poor choices and that is why we are where we are. The road that led to prison started long ago though. It is not about me, or us anymore. It is about the seven year olds of today and tomorrow. Will their road lead to prison too? Will they give up too? How many more seven year olds will bypass college for prison? Have we seen enough?

As a child I was hurt many, many times, on many many days, but that was still no reason for me to grow up and hurts others; and yet, that is what happened. Please look at the seven year old boy in the photo. He had potential. He had promise. He could have been President. For the seven year olds of today and tomorrow, we need to nurture their hope and build on their potential so they can grow up to be public officials like you, or maybe even president.
Thank you all for your time. Hopefully I can be a part of a brighter future instead of a reminder of a broken past.
Respectfully, Ramiah A. Whiteside

Letter in response and transcription of text below. 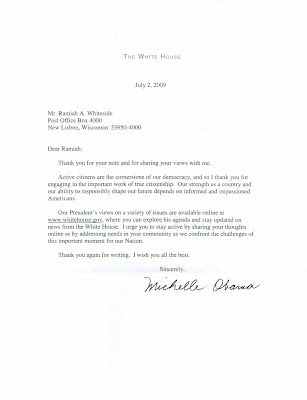 THE WHITE HOUSE
July 2, 2009
Mr. Ramiah A. Whiteside
Post Office Box 4000
New Lisbon, Wisconsin 53950-4000
Dear Ramiah:
Thank you for your note and for sharing your views with me.
Active citizens are the cornerstone of our democracy, and so I thank you for engaging in the important work of true citizenship. Our strength as a country and our ability to responsibly shape our future depends on informed and impassioned Americans.
Our President's views on a variety of issues are available online at www.whitehouse.gov, where you can explore his agenda and stay updated on news from the White House. I urge you to stay active by sharing your thoughts online or by addressing needs in your community as we confront the challenges of this important moment for our Nation.
Thank you again for writing. I wish you all the best.
Sincerely, Michelle Obama see Ramiah's blog at:http://ramiahwhiteside.blogspot.com/ 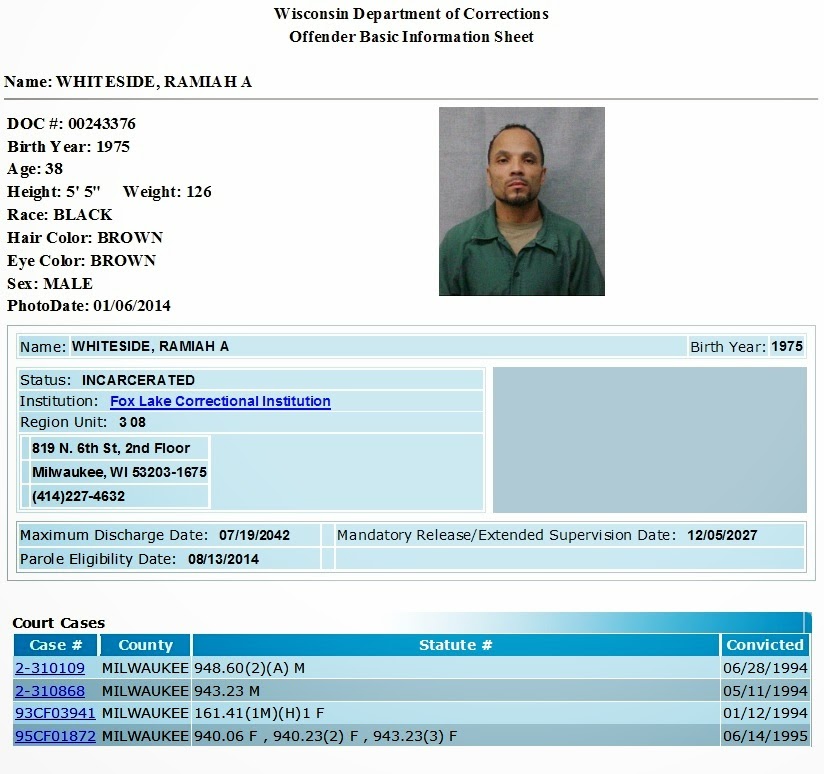 This is such a small word. My husband is incarcerated and we have been fighting the battle for freedom for a long time now. Part of that battle consists of writing Kathleen Nagle (for what it's worth) and she responded but whoever mailed her letter to me mistakenly included a letter from a Judge to a Ramiah Whitside. I read the letter and was baffled at how a Judge could be on your side and not have it recognized or acted upon by the Parole Board. I have since returned the letter but my prayers are with you. Keep faith because God is going to show up and show out! Bless you!

Miss you and love you ramiah!

Are you serious? Keep faith because God is going to show up and show out. You do know he killed 3 people, which includes the love of my life. You do know that they are not coming back right. The love I still have for Kimberly Candice Carr is the reason the hatred I have for this sad human being WILL ALWAYS BE REAL.

Love you so much keep believing God!

Accidents do happen , people change and you have to learn to forgive. I'm so glad God doesn't judge us like people do!

Dude ride out your time. You have just what, 25 more years to go. I don't have any hate or content for Ramiah. At the same time, I will not pat him on hi back for seemingly doing good deeds behind bars to earn brownie points for an early release. I won't make the time to read or research every piece he's allowed to put out. But does he ever mention his "cousin" who burned to death in that car on April 24, 1995? Does he mention any attempts to speak to the families of the other 3 victims who were standing at the bus stop?

Good deeds are great. Feeling sorry is great. It's not an apology until you're face to face with your victims asking for forgiveness. His family still has him around to communicate with on some level, we don't.

God has his hands on his life!!! Get free from your pain it's a good feeling!!!!

Hey Ramiah, this is Reggie Smith, your childhood friend. Its been a while bro. Keep God first, have faith, and I hope to talk to you soon. Remember, God forgives you...even when man doesn't!