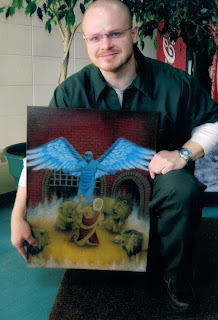 Jason has been helping with the writing for this campaign and is  a delight to work with-he is very positive and has a generous spirit.

Below is Jason's story and for further reading, here are some of his are fine essays and letters to the powerful.
Dispelling DOC dogma

Jason's story
At the age of 19 and following significant personal and familial difficulties that resulted from Jason's father's death when he was 15, Jason engaged in high risk, criminal behavior in the form of burglaries—this resulted in the shooting of a police officer during an attempt to evade arrest from one such burglary. The officer was wearing a bullet-proof vest and was not seriously injured in the shooting. In July of 1996, Jason accepted a guilty plea and was sentenced to 50 years in prison with the possibility of parole as an expected belief within the system. Almost 20 years later and with numerous accumulated educational degrees/diplomas/certifications and an affirmed statement that all rehabilitative programming has been accomplished (a statement made almost 2 years prior to Jason's first parole eligibility date in 2008), Jason still remains in medium custody within the prison system and has been denied parole twice, each time with a 3-year parole deferment given and premised. on the identical reasoning that insufficient time for punishment had been served and release would be at a risk to the public [neither reason was based on any evidence other than the offense committed and by dismissing all positive indications of rehabilitation]. The last parole hearing and decision illustrates this truth."

IDEOLOGY OF CORRECTIONS AND PAROLE The Wisconsin Department of Corrections is vested with the authority and responsibility to protect the public and rehabilitate prisoners in preparation for the prisoner's reentry into society. The Wisconsin Parole Commission operates under the hierarchy of the Department of Corrections to assess and grant or deny parole to parole-eligible prisoners sentenced prior to 2000. These agencies exist with the inherent understanding that rehabilitation is the ultimate goal in a correctional system.
CONCLUSION
The taxpayers of the State of Wisconsin rightly deserve to expect effective and efficient operations of the governmental agencies they fund through tax revenue. Currently, the budget for the correctional system has eclipsed the budget for the educational system. This is deplorable by any rational standard. As a continuing trend this is unsustainable by our government and takes a toll on the economy and our communities. The Wisconsin Department of Corrections and Parole Commission can begin to reverse this trend by effectively utilizing the parole system that still exists under the Old Law provisions that existed before 2000 and the implementation of Truth-in-Sentencing. In considering the case of Jason Faber, this individual has accomplished everything asked of him and more during the last 20 years of incarceration, and he has proven to be what one should consider a model prisoner. Continuing to incarcerate someone who has fulfilled every rehabilitative goal possible and more to ensure success on reentry under parole is a disservice to the correctional system and our communities who would benefit from his release. As taxpayers, shouldn't we be asking why this man is still in prison? Does a person who enters the prison system at 19 years of age and is now nearing 40 years old deserve consideration for all he has done to rehabilitate himself? And if this state and correctional system believe in second chances then why hasn't this person been given one? He can never change what he did, but clearly he is not the same person he once was as a young adult. After reading this case, anyone who feels this man deserves a second chance on parole should contact the governmental entities listed above and request that Jason be reviewed for immediate parole or transition through the system.

Background
Jason Faber is an honest, hardworking and deserving man. He has transformed himself since he was first incarcerated and there is no sense in keeping him in prison. Our prisons are dysfunctional and dangerous because of overcrowding, shortage of staff and a total loss of mission by the department of Corrections. We can start turning this around by releasing parole eligible old law prisoners like Jason, who have no business being in prisons anymore. Jason Faber is needed out here. He is a fine man.
Most Recent Signers
Jessica Ritter from Phoenix, AZ
Jun 24, 2017
FFUP from Blue River, WI
Dec 2, 2015
Author